I’ve made this dish so many times using a variety of different types of healthy leafy greens. It works well with Cavallo Nero or Spinach. For this particular recipe though, I am using some freshly harvested Swiss Chard that I grew for the first time this year.

Chard is part of the beet family, although you won’t be pulling up any taproot as such. For this recipe we don’t need the stalks but after removing the leaves you can chop these up and freeze, ready to use in another recipe.

I found swiss chard so easy to grow, I have never used it before now but was interested just to see what it was like. I popped a few seeds into a shallow container round April to start off on my windowsill. Like with most of the plants I start off I waited until they were around and inch tall before leaving them outside for a week or two. At which point I transplanted them into the vegie patch.

I watered them regularly as we had such a long hot and dry summer but apart from that and throwing down some slug pellets, I literally just left them to their own devices.

Boy do these things grow, huge beautiful plants that just keep giving. You can harvest all year round, just cut a few stalks off each plant to thin them out and keep returning taking what you need.

You can make up a much larger batch of this pesto and freeze for up to 6 months. This recipe serves 4 so simply scale the ingredients up for a larger batch

Stay up to date 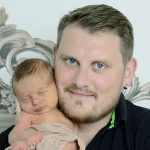